When the SpaceX CRS-15 mission launched from Cape Canaveral on June 29 en route to the International Space Station, it carried some 250 experiments. Among them was one designed by UC Santa Barbara mechanical engineers Paolo Luzzatto-Fegiz and co-PI Eckart Meiburg. Both specialize in fluid mechanics; Meiburg focuses on simulations, while Luzzatto-Fegiz is an experimentalist.

Recently they have partnered to advance understanding of sediment, including its compositional characteristics and dynamics, and, especially, how it is transported, which can have important environmental impacts. Sediments can carry pollutants into water bodies, redistribute nutrients in watersheds, and affect land use. When an ocean earthquake occurred near Newfoundland in 1929, enough accumulated sediment was moved to cause a tsunami that killed 28 people and devastated transatlantic telecommunications cables.

According to Luzzatto-Fegiz, the particular phenomena that interest him — electrostatic forces that cause tiny solid particles to come together in fluid — are difficult to study because the forces driving them are small and largely obscured by gravity. “For example,” he says, “Rivers send sediment made up of particles of clay, sand, and other matter to the ocean. As the particles sink, they very slowly come together due to some weak but important electrostatic forces that play a role in nutrient cycling and mineral accumulation in the ocean."

It is, however, very hard to measure those forces in the lab. Luzzatto-Fegiz explains: “Ideally, we would like to shake a little vial full of mud that is disaggregated and observe the clumping process. But the mud is more than twice the density of water, so it sinks very fast, too fast for us to observe the process accurately enough to understand the dynamics involved.” Further, as the clumps sink, friction with the water tends to cause pieces to be torn away from the clump.

“If you were to put the clay into the ocean where it is 300 feet deep, there would be plenty of time to observe the process before the clump reached the seabed, but it’s not practical to do that," he adds. And the shearing force, which causes pieces to tear away as the clump sinks, would still affect the process. 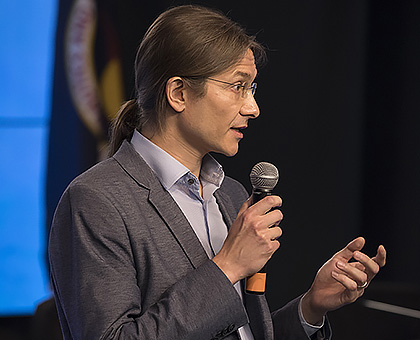 To get around that challenge, Luzzatto-Fegiz, working with Meiburg, postdoctoral researcher Bernard Vowinckel, and undergraduate Nick Rommelfanger, a physics student in UCSB’s College of Creative Studies, created what may be the first series of sediment experiments to be performed in the Space Station’s micro-gravity environment. Luzzatto-Fegiz and Rommelfanger were present for the SpaceX launch from the Kennedy Space Center.

Electrostatic forces that cause particles to cluster exist whether or not gravity is present. The experiment will allow the team to observe that process over a long time scale (one month) in the absence of gravitational settling. Space-station Astronaut Dr. Alexander Gerst, who also happens to be a sediment expert, began the experiments the week of July 23 and will provide the results as downloadable images a month later. 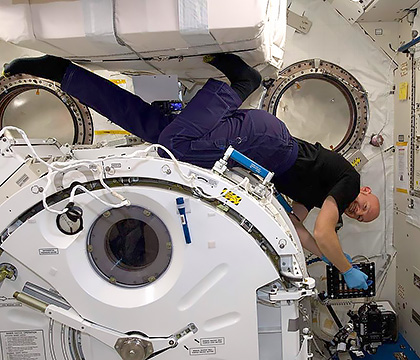 Astronaut Alexander Gerst sets up the Luzzatto-Fegiz experiment in the Japanese Experiment Module aboard the International Space Station. Photo courtesy of NASA​

The team hopes to see multiple important results, including what the largest aggregate size in space might be. The largest aggregates seen on Earth are about one millimeter in diameter — perhaps, Luzzatto-Fegiz suggests, reflecting the view of many oceanographers, because, as noted above, friction causes the clumps, or "flocks," to break apart as they fall through the fluid.

“The main thing we don’t’ know how to model are these cohesive forces,” he explains, “so we’re going to test it to see if, by removing the gravity element, we get larger and larger clusters. If so, we can then use that to build a model of the cohesion and then combine that with the model of the fluid friction, which is very well established.”

Because many experiments on engineered colloids (liquids with particles in them) have been conducted previously on the space station, Luzzatto-Fegiz notes, the equipment necessary for the work is already in place, so that he had to send only samples aboard the SpaceX rocket.

The research has several important applications on Earth, including in the areas of ecosystem modeling, deep-water hydrocarbon exploration, carbon sequestration, and mobilization of contaminants in water bodies around the world.

Watch a short video explanation of this and other experiments on the mission.
Watch the full version of the pre-launch science presentation at the Kennedy Space Center.
Watch a video about the work shot at UC Santa Barbara.