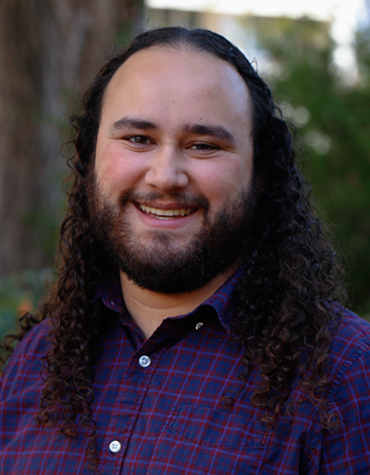 I live in Goleta and work at Praevium Research. The company makes VCSELs [vertical- cavity surface-emitting lasers], which are very useful in medical applications and autonomous driving, and are used for facial recognition in modern phones. VCSELs are also leading-edge technology for optical coherence tomography [OCT], which is used to make very high-resolution scans of the retina to detect, for example, early signs of glaucoma. My main responsibilities include testing the reliability of the devices we make. I test the lasers for thousands of hours, write up reports, and design the circuits for our testing loops.

My job is fun because I'm constantly learning. Our company is made up of only fourteen people, so we all need to learn how to do a little bit of everything. For me, Praevium provided the best opportunity for my personal and career development. After I graduated, I wondered if I had truly learned enough to be successful in industry. But during my first year here, I saw that I had the right foundation and realized I was prepared for this. I can communicate, I understand what’s going on, and if I don’t, I can pick up the textbook, read about it and figure it out.

I’m the only electrical engineer in my company, so collaboration with someone in another discipline is common. I’m in constant contact with our mechanical engineer, who makes enclosures for the device reliability set-ups; with physicists, who look at the actual models of the device and make sure it’s going to work; and with the clean-room engineers, so that I know what’s coming down the line.

Group-project work at UCSB prepared me for collaboration in industry. I had to learn coding, which been amazingly valuable. I use MATLAB and Python almost every day and learned both starting in freshman year. The classes on analog circuits, modeling and all my lab projects were amazingly valuable, since they serve as a foundation for a major part of my work today. UCSB provided pivotal tools that prepared me to work in industry and ultimately change my life.