The COVID-19 outbreak brought with it an almost immediate and unprecedented national shortage of personal protective gear needed by health-care workers and others seeking to prevent the spread of the virus. N95 masks intended for single use by front-line health workers were being cleaned and reused. Questions arose: Were they clean? Were they safe? Were they still effective?

Further, cases of COVID-19 spiked wherever large groups breathed recirculated air in closed spaces, such as on navy and cruise ships, and in hospitals, restaurants, churches, elder-care facilities, and prisons. While some of those facilities were closed temporarily by state and local stay-at-home orders, caseloads spiked in prisons and on navy ships, for example, which had to continue operating or, in the case of cruise ships, were not allowed to dock. As of June 1, according to the Santa Barbara County Public Health Department, 1,669 cases of COVID-19 had been identified in the entire county (population 91,350) — just under 2 percent — while Lompoc federal prison had 971 cases among an inmate population of about 1,500, an infection rate of ore than 60 percent.

Given that COVID-19 will likely be with us for some time, and some other new virus may catch us off guard in the future, solutions are clearly needed to disinfect masks for reuse, as well as to decontaminate shared surfaces and spaces and neutralize the virus in recirculated air. UV lights — those emitting in the very short, ultraviolet, wavelengths — are promising. Already, some jails and prisons are using robots topped by a cylindrical bank of UV lights to decontaminate cells and shared spaces, such as dining halls. UV light damages human skin and eyes, so the rooms are emptied before the robots go through, sanitizing everything in them. A UVC robot is used at the county jail in Grand Rapids, Michigan, and as of mid-May, the 1,400-bed jail had seen only two positive cases of COVID-19, even though Michigan has one of the highest positive case counts in the country.

For the past twenty years, the Solid State Lighting and Energy Electronics Center (SSLEEC) in the UC Santa Barbara College of Engineering has been a world leader in developing ever-more-powerful and energy-efficient solid-state LED lighting. For about fifteen years, smaller SSLEEC research efforts have been directed at developing LEDs emitting in the ultraviolet wavelengths of 200-280 nanometers (UVC), primarily with an eye to water purification in areas of the world lacking water-treatment infrastructure. UVC lights have been used for decades by municipal water plants, because they destroy the DNA of many microbes, rendering drinking water safe. 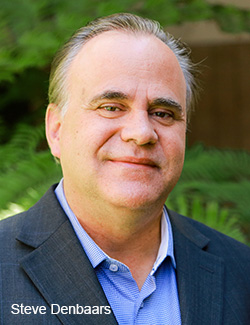 While we receive ultraviolet light in the form of UVA and UVB from the Sun, UVC, the ultraviolet light of choice for purifying air and water and for inactivating microbes, can be generated here only via man-made processes. According to UCSB materials professor and SSLEEC co-director Steve Denbaars, the center’s UV-C work has intensified over the past four years. Meanwhile, with government funding for UV LED extremely limited, many other universities in the United States have stopped working on them altogether.

Until recently, UVC decontamination systems — whether in municipal water-treatment plants or devices like the SteriPEN, which backpackers use to purify water — have been enabled not by semiconductor-based LEDs, but rather by mercury-vapor lamps. If the glass breaks in the SteriPEN, mercury is released, rendering the device useless.

One big drawback to using mercury lamps for disinfection of enclosed spaces is that they require a lot of voltage to operate, which is difficult to achieve for a portable device should it need to run on battery backup during a power outage. But LEDs, which are small, non-toxic, run on little power, and are essentially shatter-proof “can go everywhere,” says Denbaars. “You could even imagine having a UV LED on your cellphone to decontaminate it if someone else touches it.”

When, in March, UCSB Executive Vice Chancellor for Research Joseph Incandela ordered UCSB labs to ramp down campus laboratories in response to the outbreak, exceptions were made for what was deemed “essential research.” SSLEEC’s UV projects qualified and were allowed to continue. “Pre-COVID, we had one [PhD] student working on it; now we have five,” Denbaars notes. “Once we got declared essential research, we shifted people from the white-LED projects to the UV LED projects.”

A preview of a study to be published by The National Institute of Allergy and Infectious Diseases compared four methods for decontaminating N95 respirators: treating them with UV light, with heat (150 degrees Fahrenheit), with a 70-percent ethanol solution, and with vaporized hydrogen peroxide (VHP).

VHP and ethanol had the highest rate of inactivation of SARS-CoV-2, which causes COVID-19; however, after two rounds of usage the VHP- and ethanol-treated masks showed marked drops in filtration performance. The heat-treated masks constantly underperformed compared to the UV-treated masks and did not function effectively after two decontamination.

Further, says Chris Zollner, who is completing his fourth year as a PhD student in SSLEEC, “In this study, the researchers placed the mask far from the UV LED, resulting in a low ‘dose’ of UV radiation, so they needed a lot of time to get UV disinfection to work well. I suspect that, had they placed the UV LED closer to the mask, it would have been disinfected much more quickly.” 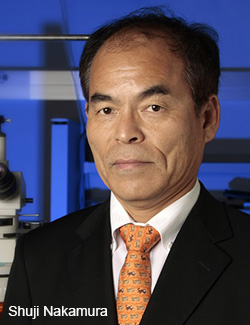 At their current efficiency and power, the UVC LEDs are able to decontaminate masks without damaging them, and as power and efficiency increase, Denbaars notes, he expects to see sanitization times come down to a few seconds of exposure. And, in fact, in April, Seoul Semiconductor, an SSLEEC industry sponsor, received hundreds of orders after reporting that its UVC LED lights had achieved 99-percent sterilization of coronavirus in thirty seconds.

Denbaars says that the COVID-19 pandemic has ignited the conversation around UV LED research funding. “I think the funding landscape is going to change,” he notes. “Government people are calling us now and asking what it will take to get UV LEDs to be really efficient.”

Currently, however, LEDs emitting UVC light are only about 3-percent efficient, making them most effective for low-power portable applications, as seen in some UV-LED-equipped water bottles, while the LED light bulb you buy at the store is about 60-percent efficient. “So, we have a twenty-fold improvement we can do,” says Denbaars, adding, “It’s a complicated process in materials science. To increase the power, we need to increase the efficiency of the LED, and that involves doing a lot of the same things we did to increase the efficiency of LED lightbulbs, but doing it all over again for UV wavelengths.”

The team, spearheaded by Denbaars, who uses metal organic chemical vapor deposition (MOCVD) to grow the semiconductor materials, as well as UCSB materials professors James Speck, who characterizes the new materials, and Nobel Laureate Shuji Nakamura, who designs the device, have developed a new material, made by depositing a thin film of the semiconductor alloy aluminum gallium nitride (AlGaN) on a silicon substrate.

“Current UVC disinfection lamps, such as mercury vapor lamps, have fixed light emission of 254 nanometers,” says Denbaars. “However, many bacteria, fungi, and viruses are killed more efficiently at different wavelengths. The AlGaN material system being developed at UCSB allows for greater flexibility in fine-tuning UVC light emission from an LED, which would make targeting specific microorganisms a real possibility. Aluminum gallium nitride is the only semiconductor that provides light of the correct wavelength, and UCSB is a world leader in developing it.” 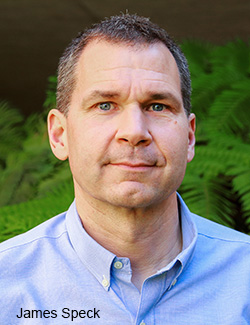 According to Zollner, the materials challenge in UVC LEDs lies in the fact that a lot of aluminum is needed to increase the energy of the conducting electrons, which can then recombine with positively charged holes to release high-energy photons as UV light. But aluminum atoms bond very strongly to nitrogen atoms within the crystal, making atomic-scale control of crystal growth more difficult, so that expensive and time-consuming methods are often required to make a functioning UV LED on sapphire. While many other labs and a number of companies work in that space, UCSB has developed a new process: by replacing the more-often-used sapphire with silicon carbide, the team is able to use much simpler traditional epitaxy methods to grow high-quality AlN and AlGaN materials. (Unlike sapphire, which is an insulator and structurally dissimilar to AlN, SiC is a semiconductor material with a close structural similarity to AlN.)

In a paper published in the journal ACS Photonics in January, the researchers write, “The performance of UV–C AlGaN LEDs is limited by poor light-extraction efficiency (LEE) [the fraction of light generated in the semiconductor that is actually emitted from it] and the presence of a large density of threading dislocations [disruptions in the atoms that form the material’s crystal structure]. We demonstrate high-power AlGaN LEDs grown on SiC with high LEE and low threading dislocation density.”

Heating and air-conditioning systems that recirculate air are another big target for improved decontamination. Denbaars notes that state-of-the-art high-efficiency particulate (HEPA) filters are made to filter out particles down to three microns in size. However, once captured by the filtration system, viruses can shrink as they dry out, possibly enabling them to pass through the filter and be recirculated into the airplane or ship or operating room, where they may infect people. In environments lacking HEPA filters, such as on aircraft carries, rather than being captured, the viruses are simply being redistributed.

With powerful, efficient UVC LEDs, he says, “You could pass air through a light tunnel to decontaminate it; you just need enough photons to hit enough of the air. It used to be that people thought it would be nice to have contamination devices on subways and ships and other enclosed spaces where people gather in large numbers. The coronavirus has made it priority one.”
Long-term, Denbaars says, “The goal is to shift to certain shorter wavelengths of UV that are safe for skin and eyes, so you could have safe decontamination even in the presence of people. You could leave the lights on all the time for applications like hospital operating tables, navy ships and submarines, airplanes, prisons, and so on. I think we’re years, not decades, away from that.”