Elastomers constitute a wide range of polymer-based materials, from tire rubber and wet suit Neoprene to Lycra clothing and Silicone, that are valued for their ability to flex and stretch without breaking and return to their original form.

One challenge with such materials is that making them stronger usually involves the trade-off of making them more brittle. That’s because structurally, elastomers are rather shapeless networks of polymer strands — often compared to a bundle of disorganized spaghetti noodles — held together by a few chemical cross-links. Strengthening a polymer requires increasing the density of cross-links between the strands by creating more such links. That causes the elastomer’s strands to resist stretching away from each other, giving the material a more organized structure, but also making it stiffer and more prone to failure.

Inspired by the tough, flexible polymeric byssal threads that marine mussels use to secure themselves to surfaces in the rugged intertidal zone, a team of researchers affiliated with the UCSB Materials Research Laboratory (MRL) and  colleagues beyond it has developed a method for overcoming the inherent trade-off between strength and flexibility in elastomeric polymers.

“In the past decade, we have made tremendous advances in understanding how biological materials maintain strength under loading,” said Professor Megan Valentine, of Mechanical Engineering, the corresponding author. “In this paper, we demonstrate our ability to use that understanding to develop useful manmade materials. This work opens exciting lanes of discovery for many commercial and industrial applications.” 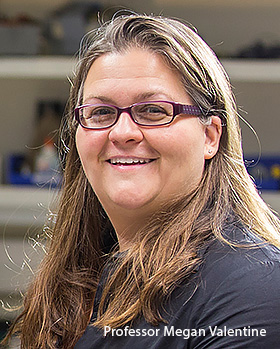 To achieve networks having architecture and performance similar to those of the mussel byssal cuticle, the team synthesized an amorphous, loosely cross-linked epoxy network and then treated it with iron to form dynamic iron-catechol cross-links.

In the absence of iron, when one of the covalent cross-links breaks, it is broken forever, because there is no mechanism for it to heal itself. But when the reversible iron-catechol coordination bonds are present, any of those iron-containing broken cross-links can reform, not necessarily in exactly the same place but nearby, thus maintaining the material’s resiliency even as its strength increases. The material is both stiffer and tougher than similar networks lacking iron-containing coordination bonds.

Further, as the iron-catechol network is stretched, it doesn’t store the energy, so when the tension is released, the material doesn’t bounce back like a rubber band, but rather, dissipates the energy. The material slowly recovers to reassume its original shape, much like a viscoelastic material, such as memory foam, does after the pressure on it is released.

Similar previous efforts, also inspired by the mussel’s cuticle chemistry, were limited to wet, soft systems such as hydrogels. Here, though, the researchers incorporated iron coordination bonds into a dry polymeric system of a type that could potentially be substituted for stiff but brittle materials, especially in impact- and torsion-related applications.

“A material having that characteristic, called an ‘energy-dissipative plastic,’ is useful for coatings,” said Cristiani, a PhD student in Israelachvili’s lab. “It would make a great cell-phone case because it would absorb a large amount of energy, so your phone would be less likely to break upon impact with the floor and would be protected.”

The dry system the researchers used is important for a couple of reasons. In a wet system, the network absorbs water, causing the polymer chains to stretch, so that not much extra flexibility remains. But with a dry material, the amorphous spaghetti-like strands are initially very compact, with a lot of room to stretch. When the iron cross-links are added to strengthen the polymer, the stretchiness of the dry material is not compromised, because those bonds can break, so the polymer chains are not locked in place. Additionally, removing the water from the network results in the catechol and iron being closer together and able to form regions of high connectivity, which improves the mechanical properties. 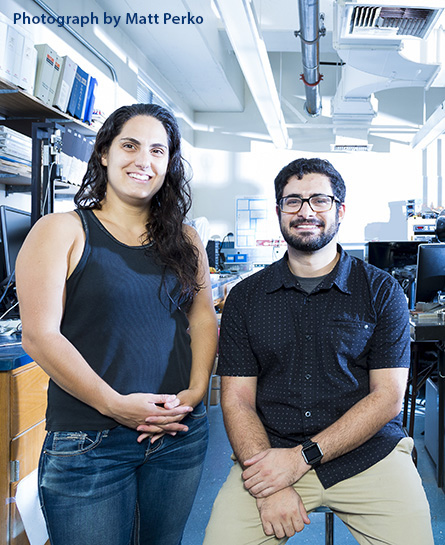 To see how iron-enhanced cross-links used in their dry network would behave in a wet network, the researchers measured the mechanical properties of an iron-treated hydrogel. “We found that the wet network was 25 times less stiff and broke at five times shorter elongation than a similarly constructed dry network,” explained Filippidi, a postdoctoral researcher in the Valentine lab.

“That's an interesting result, but an expected one,” she added, “What’s really striking is what happened when we compared the dry network before and after adding iron. Not only did it maintain its stretchiness, but it also became eight hundred times stiffer and one hundred times tougher in the presence of these reconfigurable iron-catechol bonds! That was unexpected.”

“This difference between response in wet and dry systems is huge and makes our approach a game-changer in terms of synthesizing useful engineering materials for high-impact applications,” said Valentine, adding that she attributes the success of the project to the team's "multidisciplinary, deeply collaborative" approach.