Jonathan Klamkin, an associate professor in UC Santa Barbara’s Electrical and Computer Department, has received the Director’s Fellowship from the U.S. Defense Advanced Research Projects Agency (DARPA). The prestigious prize is awarded to only the top performers among recent recipients of the DARPA Young Faculty Award (YFA), a program established to encourage young scientists to pursue high-risk, high-reward research that could result in breakthrough technologies for national security.

“We’re extremely proud of Professor Klamkin for receiving a Director’s Fellowship,” said Rod Alferness, dean of the UCSB College of Engineering. “His work to increase the efficiency of lasers in photonic integrated circuits is a key step toward developing a truly foundational technology for next-generation energy efficient data centers and optical communication networks that underpin the internet. This is a tremendous recognition of his high-quality and groundbreaking work.” 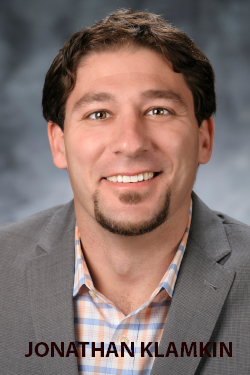 The initial DARPA Young Faculty Award provided Klamkin up to $500,000 in funding for two years. The fellowship extends his research project by one year and provides up to $250,000 in additional funding to continue his contributions to the photonics revolution.

“While the funding enables our research for another year, the recognition that comes with this highly competitive award is as important,” said Klamkin, who was one of 36 scientists and engineers in the nation to receive the DARPA Young Faculty Award in 2018. “I'm grateful not only to DARPA and our program mentor, but especially to the students and researchers involved in this project for their continued hard work and enthusiasm.”

Klamkin’s DARPA project, "ASPIC: Attojoule Sources for Photonic Integrated Circuits,” is aimed at addressing energy-consumption issues associated with lasers, the sources of light in photonic integrated circuits (PICs). PICs transfer information with light instead of electricity. Solving efficiency issues is essential if PICs are to be reliable and reach their potential for large-scale integration, similar to what happened with electronic integrated circuits in the mid-20th century, when electronic integrated circuits became a mainstay in computers, smartphones, medical instruments, sensors, and automobiles. Klamkin, who runs the Integrated Photonics Laboratory, says he has been amazed at his team’s progress over the past two years.

“Our program objectives were extremely challenging, and we met or exceeded most of them,” said Klamkin, who joined the UCSB faculty in 2015. “Our mentor encouraged us throughout to explore cutting-edge ideas. I believe this foundation will lead to new research directions in the area of heteroepitaxy of mismatched semiconductor materials and devices.”

Heteroepitaxy refers to a type of crystal growth or material deposition in which new crystalline layers of one material are formed on top of a crystalline layer of a different material. The layer-on-layer heterostructure could lead to breakthrough technology. Klamkin’s project aims to deposit compound semiconductors on mismatched silicon, which would enable the integration and production of lasers with large-scale semiconductor manufacturing techniques leveraged by the microelectronics industry.

“During the third year of this project, we will study the fundamental benefits of selective epitaxy and demonstrate novel photonic devices leveraging this technique,” said Klamkin, who has authored or co-authored nearly two hundred papers and holds several patents. “For years, the photonics industry has been constrained by specialty processes and manufacturing techniques. This is such an important field because it impacts how we communicate, sense, and process information. The work we are doing could transform the way in which photonic devices are manufactured to enable large-volume applications, including optical interconnects for data centers and high-performance computers, Lidar sensors for facial recognition and autonomous vehicles, and quantum communications and sensing.”