During a Skype interview with UCSB alumnus and University of Pittsburgh professor Rory Cooper (PhD Electrical and Computer Engineering, '89), a foldable steel Everest & Jennings wheelchair, circa 1950, is visible behind him in his office. It weighs 80 pounds.

Cooper himself, who is Distinguished Professor and FISA/PVA Chair of the Department of Rehabilitation Science and Technology and has multiple professorial appointments at the university, sits in a more recent chair of his own design. Made of titanium, it weighs just 18 pounds. The wheels are removable, and it’s easy to lift them and the 10-pound frame into the car. Cooper’s aluminum racing chair weighs 12 pounds. He used one like it to earn a bronze medal at the 1988 Paralympic Games.

Thanks largely to the advances resulting from research and engineering led by Cooper at Pitt’s Human Engineering Research Laboratories (HERL), which he started in 1994 after being recruited as an associate professor, millions of people have wheelchairs that are light, ergonomic, and efficient. They play basketball, tennis, rugby, volleyball — about seventy sports in all — in chairs designed especially for those activities, and for specific positions. The chairs require less energy to move, and their design reduces injury. Those with more severe disabilities have access to an ever-expanding range of high-tech features.

Roughly 70 people — and up to 100 when summer interns are present — work in the 40,000-square-foot facility, which includes a fully outfitted shop where engineers can build what they design. About one-third of HERL staff members have a disability. The lab is home to about 70 research projects, and it turns out 35 to 50 published papers, and registers several new patents and negotiates several licenses per year. 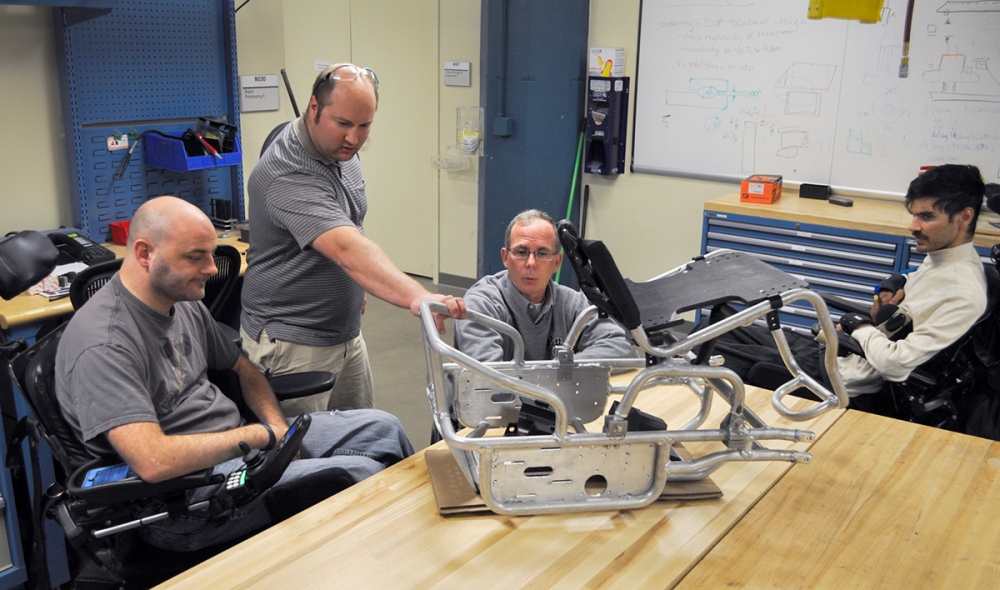 Rory Cooper (seated at center) and fellow HERL researchers examine a frame for a wheelchair being developed at the lab.

“It's a big operation that keeps me rather busy,” Cooper says in the understated manner that quickly becomes familiar, as does his commitment to ensuring that his fellow wheelchair users are able to participate fully in all aspects of life. “The goal is full autonomy and full participation as equal partners in society, and respect for people with disabilities,” he says.

HERL and Cooper’s efforts on behalf of those with disabilities were born of his own experience after experiencing a spinal cord injury while an army sergeant stationed in Germany in 1980. As soon as he began using one of the heavy steel chairs of the time, he knew he had to do something to improve it.

After returning to the U.S. from Germany, he enrolled as an engineering student at Cal Poly San Luis Obispo, where he not only earned bachelor’s and master’s degrees in electrical and computer engineering, but also started his own company, Cooper Engineering, which he ran for three years as an undergraduate before selling it.

“I’ve always been a man on a mission,” he says.

Cooper had been an athlete all his life, and the fact that he could no longer walk did nothing to diminish his competitive spirit. While at Cal Poly, he collaborated with a group of designers and inventors to share concepts and evolve the technology that led to the first racing wheelchair.

He pursued lighter-weight materials. He was one of the first to introduce a three-wheeler, and was the first to introduce the solid frame to replace the traditional folding frame. At UCSB, he also designed the Smart Wheel, a feedback mechanism to measure the force and movements on the push rims and inform redesigns to reduce the risk of carpal tunnel and rotator cuff injuries. The data it provided led him to move the axle forward on the racing chair, arguably the single most revolutionary and broadly beneficial advance in manual-wheelchair design history.

When he started racing, Cooper recalls, “I realized that you needed two separate things — a racing chair and an everyday chair. It’s funny, because the everyday chair I use now is much like the racing chairs I tried to design in the early eighties.” 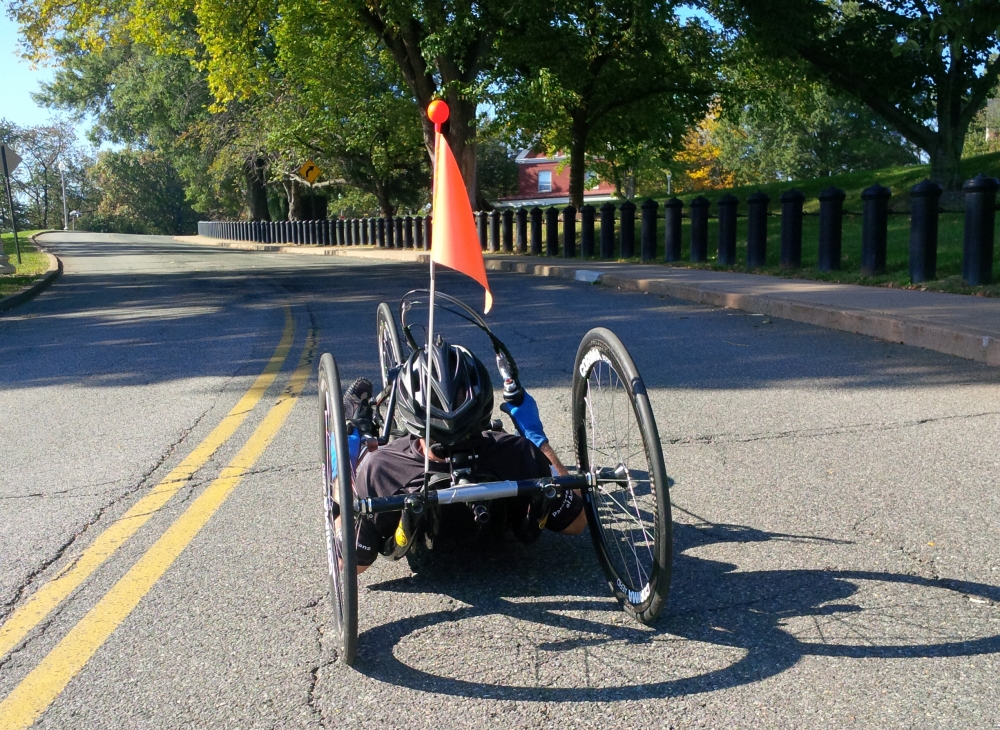 He also noticed that athletes who were pushing so many hard miles on the lighter, axle-forward chairs were not incurring higher rates of wrist or shoulder injuries, while others in heavy everyday chairs were frequently injured.“ So it was clear we should put racing technology and design into everyday chairs,” he says. Doing so took a problem that happened to eighty percent of users down to twenty percent, not only reducing pain and suffering for wheelchair users, but also saving tens of millions of dollars in health-care costs.

Cooper has always innovated. He was the first to put fenders over the wheels on his racing chair to prevent the tires from burning his underarms when racing. “People laughed, but you can’t find a racing chair today that doesn’t have them,” he says.
Wheelchair racers also suffered from compensating for the crown on roads, which tended to send them off to one side or the other and led to crashes. Cooper developed a crown-compensation mechanism to keep the chair going straight.

THE SOCIAL SIDE OF DISABILITIES

Those who incur injuries that create long-term or lifelong physical disabilities face challenges on multiple levels. They must heal their bodies and then relearn nearly every aspect of life. After overcoming all that, they face another obstacle in the form of societal indifference and even outright discrimination. It is one thing to face a physical challenge that distinguishes one from the mainstream population; it is another to be considered, unjustly and by assumption, somehow incapable of contributing to society as a result.

The Americans with Disabilities Act was not passed until 1990, so at the time of his injury, Cooper, like millions of others with disabilities, had few legal protections against discrimination. In fact, when he applied to the UCSB Engineering PhD program, Cooper’s application was rejected initially, because some on the admissions review board believed his outstanding grades had been artificially inflated to compensate for his disability. It was a different time.

Cooper was eventually admitted, and he entered UCSB excited about the prospect of gaining a multidisciplinary perspective, which wasn’t possible at many universities. After graduating, he planned to work for NASA, or for Disney, “designing rides or animatronics.” But a key advisor, Stephen Horvath, mentioned to Cooper that he was a talented engineer who had an obviously strong affinity for the problems facing people with disabilities, and suggested he consider making a career of designing better wheelchairs and related devices to serve them.

After attending a few conferences and realizing “there was a profession in that,” Cooper changed the focus of his dissertation from robotics to the control aspects of wheelchairs. He completed his degree in 1989, after only three years, while finding time to train for the 1988 Paralympic Games in Seoul, South Korea, where he won a bronze medal in the 4x400-meter relay race and competed in four other events, including the marathon.

Cooper himself has been part of a growing body of positive imagery associated with those who have a disability. In 2009, General Mills selected him to appear on a Cheerios box as part of a special two-year campaign to recognize veterans who were athletes. 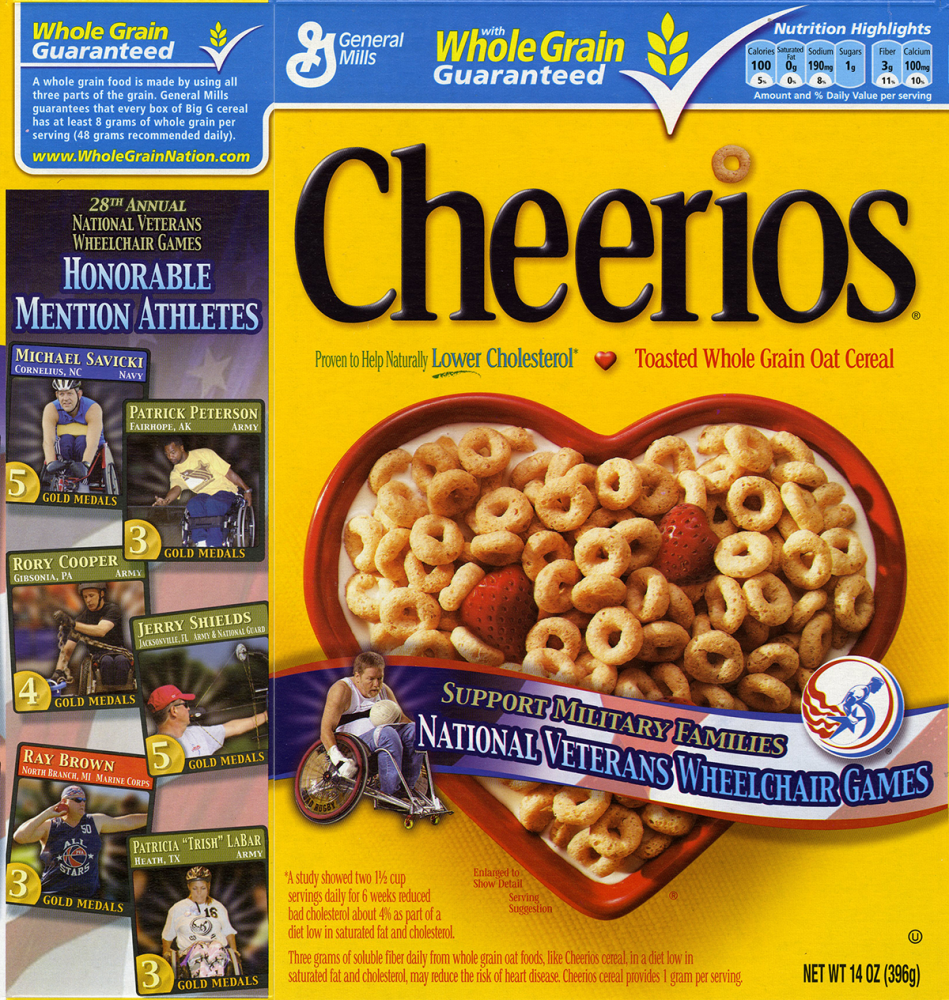 In 2009, Cooper (#4 on side panel below) appeared on a box of Cheerios as part of a two-year General Mills campaign to celebrate athletes who were veterans.

“It was cool that Cheerios would put a vet with a disability on the box,” he says. “That can help to overcome the biggest barrier to having a disability — the social barrier. People, especially kids, read the story at breakfast, and they see that disabled people can be multifaceted and are just people.”

Cooper’s work has earned him worldwide recognition, not only for his groundbreaking technology, but equally for his character and qualities as a person. His CV lists pages of awards and proclamations, each a variation on a theme introduced with such phrasing as “For exceptionally meritorious service…,” “For a highly prolific spirit of innovation…,” “For transformative achievement…,” “For inspirational leadership…,” and For selfless service.”

He recently added two more. He won a 2017 Samuel J. Heyman Service to America medal in the Science and Environment category, and he was one of 396 members of the American Association for the Advancement of Science to be named a 2017 Fellow.

Much of HERL’s wheelchair research explores strong yet lightweight composite materials, power and computer-controlled innovations, and advances in propulsion and mobility. Depending on the user’s needs, a chair may incorporate laser sensors, abundant software, and machine learning.

The center has developed a series of assistive robotic arms, including one currently being tested that receives signals directly from the brain, and another, the STRONGARM, which mounts to the chair and replaces a lift for assistance with transfers. It folds behind the chair when not in use. The Personal Mobility and Manipulation Appliance (PerMMA), incorporates two robotic arms controlled by touchpad, microphone, or joystick, depending on the users’ needs, to help with everyday tasks. The MEBot is a lightweight electric wheelchair that can climb curbs and self-level on uneven pavement.

The Virtual Coach onboard coaching system is a breakthrough using data communication to support people ("without being a nag") who have advanced chairs in using them correctly, thus avoiding problems with ulcers, swelling of the limbs, and other medical conditions.

And HERL adaptive technologies go beyond wheelchair applications. The Cueing Kitchen, for example, was designed for people who may struggle with food preparation and other daily activities because of cognitive impairments resulting from traumatic brain injury, dementia, or Alzheimer’s disease.

The Cueing Kitchen is a basic residential kitchen cabinet layout modified with portable or wireless sensing and cueing technologies that recognize, for example, if an individual is using the correct appliance and for the correct duration, has opened the correct cabinets or appliances, has retrieved or stored the correct item, or is working in the correct region of the kitchen.

HERL is a highly collaborative, deeply interdisciplinary operation that includes medical doctors, physical and occupational therapists, and mechanical, computer, and bio-engineers. In what Cooper refers to as “participatory action engineering,” the lab constantly engages with veterans and others who use assistive devices. “Ever since its inception, I’ve wanted to include veterans in HERL as employees and trainees,” he notes. “The key is to get different perspectives, and it’s another way veterans can contribute so that we’re solving real problems — their problems.”

Despite dramatic advances in technology and expanded insurance coverage of adaptive technologies that incorporate it, challenges remain, especially in overcoming the social stigma related to having a disability.

“As successful and known as I am now, I still get people who basically tell me to my face that I’m wasting my time working on these problems,” Cooper explains. “They’ll say, ‘They have all the technology they need.’ No, they don’t, not until they have equal participation and standing in society.”

Cooper is in it for the long haul. “This is my calling, my passion,” he says. “I consider myself fortunate to apply my engineering talents to help people with disabilities and people in general, and change society just a bit for the good. Sometimes I go up to a vet I see using something we created and ask about the new backrest or wheels, and they say, ‘It’s unbelievable. It’s changed my life.’ How can anything be better than that?”

As we spoke, Cooper was preparing to compete in a marathon to be held at Fort Bragg the following weekend. “The vast majority of the people will be runners, but now they respect us for how hard we train,” he says. He finished in 1:40, about 22 minutes faster than the world record for a running marathon. Average bicyclists can't keep up with fast wheelchair athletes.

And average humans can’t keep up with Cooper, because he’s always moving, always racing to serve — and change — the world.